For a player who appeared in 73 games in 1969, totaling 122 innings pitched for two teams, it's surprising enough for Topps not to have a card for him the following year.
But when you then realize that we're talking about Jim Bouton, bad-boy ex-Yank and author of one of the all-time classic baseball books: "Ball Four", as well as being an established player who posted a 20+ win season for the Yanks in 1963, you have to wonder what was up with being left out of the card set.
Though his book wasn't "officially" released until June of 1970, it wasn't a secret as to what was in there, and Bouton certainly pissed off many in the Major League baseball world who found out about his tell-all tome.
Perhaps Topps could be included as those who had Bouton on their "persona-non-grata" list?
I can't really find anything on this, but I went ahead and created my own version of a "card that shoulda' been".
If I do go ahead and create more of these, I'll limit this to cards of players that had substantial playing time the season before, did NOT retire over the off-season, yet had no cards issued the following year.
Enjoy... 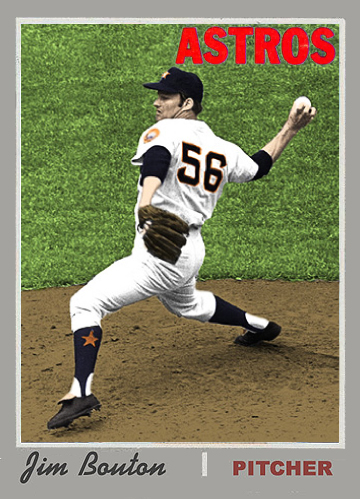