OK. I also know THIS card has been written about by many people, but I could not resist having an entry on this blog about one of the most unique and interesting cards of all-time.
In the history of baseball cards, you will not find another that has "Pinch Run." listed as the position of the player depicted. On top of that, you will also never see another card back that has "Major League Base Running Record" for the stat line. Classic: "Games; Runs; Stolen Bases; Caught Stealing". And nothing else! Especially funny when you consider Topps didn't even have a stolen base column for "regular" cards.
By now we all know the story behind Herb Washington. A world-class sprinter who was tapped by A's flamboyant owner Charlie Finley to be the teams "Designated Runner". Not entirely a horrible idea when you think about it. But alas, the experiment failed about a third of the way into the 1975 season, and Washington was let go. But, lucky for us,  NOT before having his very own baseball card! Great move on Topps' part!
Just look at this masterpiece of 1970's design: Purple and Pink borders framing a player who happens to be wearing a yellow and green uniform! Brilliant! And upon further review, look at that photo. Classic "posed" picture of a player deep into the "action" with the empty stadium in the background. Fantastic.
By the way, on a side note: notice the slightly mis-cut/tilt of the card. Notorious for the 1975 set. I remember going through four badly cut Bob Gibson's before finally getting a properly cut one back then!
I've included a scan of the card back as well for everyone to see how unique it was. 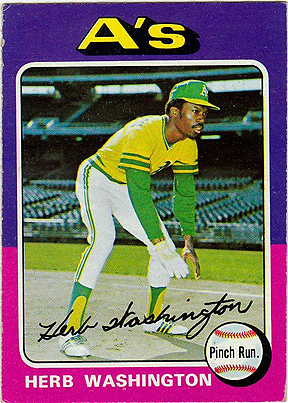 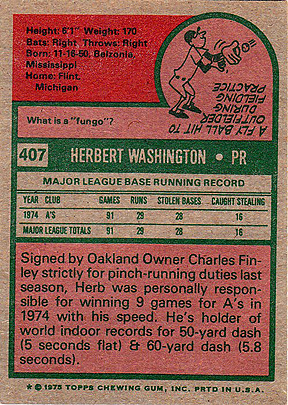