I never planned on creating a 1976 "traded" card for Reggie Jackson. He was dealt on April 2nd of '76, way past any deadline Topps would have to get a card in their set for the year. So it's understandable why Topps missed out on it.
But I came across a couple of other people who created one, and it got me thinking of what it would of looked like if there was one. Especially since, as we all know, there was never a proper Reggie card for his one year stint in Baltimore.
So while it doesn't really fit my criteria for the "Missing in Action" series, it's unique in terms of 1970's baseball history and one of it's most iconic players.
So here goes: 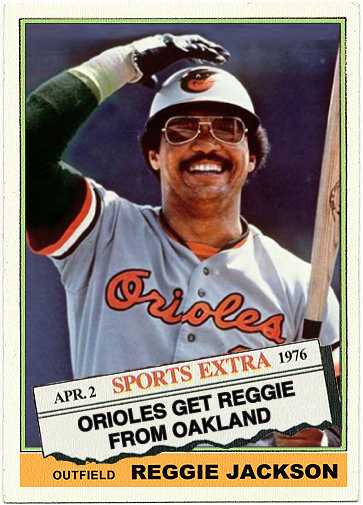 This also got me thinking of what ALL the cards in the Traded sub-set would look like with proper, non-airbrushed images, so this may be another thread I might start in the future.
Keep an eye out for it!
Posted by John23 at 9:14:00 AM