In my second installment of "When Airbrushing Goes Terribly Wrong", I give you Topps' 1972 #360 Dave Roberts, the pitcher, NOT to be confused with the former 1972 #1 Draft Pick with the same name who played at the same time.
Traded by the Padres to the Astros in December, 1971, Roberts actually was coming off of a good season, sporting a 2.10 E.R.A. Though ending the campaign with a 14-17 record. Obviously, pitching for a weak Padre team kept the win total low while completing 14 of 34 starts and ending up 6th in Cy Young voting.
Nevertheless, this bought him a ticket out of San Diego, and Topps tried to catch the trade with some nifty airbrushing for the 1972 set.
Well, they certainly fell a bit short in the execution department.
Just take a look at that cap! It literally looks like it wasn't airbrushed, but colored in with a Crayola crayon! Classic look of coloring "inside the lines" going on there. Why they didn't bother color-correcting the Padre brown and yellow on his collar is a mystery since it would have been minor work after the botched up cap work.
He actually had what can be considered his best season as a major leaguer for Houston in 1973 , sporting a 17-11 record with 6 shutouts and a 2.85 E.R.A., before he bounced around for the rest of his career until 1981 with the Mets.
Overall, he ended up with a record of 103 wins and 125 losses, and a 3.78 E.R.A. With 20 shutouts. 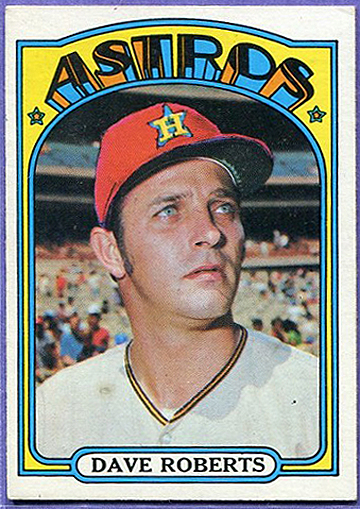