Pete Rose.
Regardless of what you think of him, all of us must acknowledge his intensity, drive and hard-nosed approach to the game of baseball on a team that dominated throughout the mid-1970's and beyond.
Baseball's all-time hits leader had an amazing decade: garnering six 200-hit seasons (in addition to two 198 hit campaigns), an MVP award in 1973, and being selected to nine out of ten National League all-star teams while playing three different positions: outfield, third base and first base (he was also an all-star at second base in the '60's, making that four positions as an all-star!).
Arguably, even though he won his MVP in '73, 1976 can be considered his most productive season of the decade with his 130 runs, 215 hits, 42 doubles, and .323 batting average, which got him a fourth place finish in MVP voting (won by teammate Joe Morgan). On top of all that, the Reds went on to sweep the Yankees for their second-consecutive championship.
Also up for debate is, in my opinion, his 1976 Topps card being the coolest Pete Rose card of the 1970's, maybe even his career. What an intense shot of "Charlie Hustle". Now THIS is a close-up portrait done the right way on a baseball card! The glare, the photo perfectly coordinating with the card colors, and yes, once again the "all-star" designation in the lower left only enhances the overall feel.
Oddly, Rose was actually selected as an outfielder for the 1975 all-star game, batting lead off, but his card lists him as "3rd Base" which is where he played for the 1976 game. Ron Cey is ALSO shown as the third baseman for the N.L all-stars on HIS 1976 card, leaving us without an outfielder on the N.L. team among Topps cards that year, but TWO third basemen.
Regardless, I have always been a HUGE fan of this card, and if it wasn't for his teammate Johnny Bench's card of the very same year (profiled earlier on this blog), THIS could be my all-time favorite baseball card. It just slammed home that aura that Pete Rose had back then, on a team that steam-rolled through baseball, dominating the sport with a core of Hall-of-Famers like Joe Morgan, Tony Perez, Johnny Bench, and yes, Pete Rose. HE is a Hall-of-Famer in my eyes, no matter what baseball tells me. 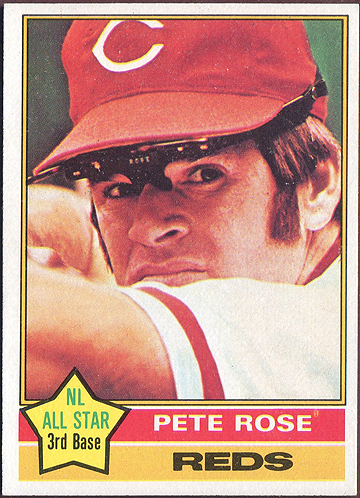