It would have been great for Topps to release a proper Frank Robinson card in 1976, instead of just his small appearance on the Indians team card. He was still an "active player" during the Winter of 1975, so to go to press without a card for him was curious considering he was one of the greatest sluggers in history and didn't retire as a player yet.
It's a shame since the 1976 set was always one of my favorites, and this would have just made the set that much greater.
I went ahead and designed one myself. Check it out. Gave it a "DH-MGR" call-out with the DH player icon Topps used that year on other cards. 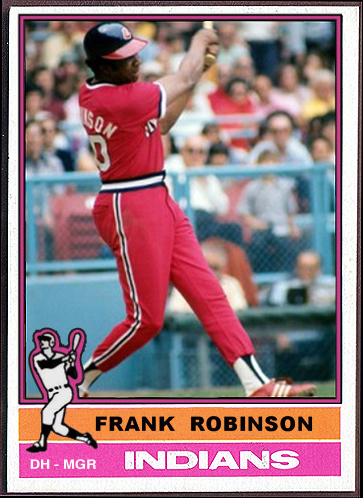 On a side-note: I'm having a hell of a time coming up with other cards in this theme that fits my criteria. That is: no pre-rookies, no cards after retirement, no "memorial" cards, etc. Only cards of active players that were, for some reason, left out of a Topps set in the 1970's. If anyone out there has any suggestions, let me know.
Thanks!
Posted by John23 at 12:23:00 PM