Here’s a “not so missing” 1973 card for former shortstop John Gamble, who appeared in a scant six games for the Detroit Tigers during his rookie 1972 season: 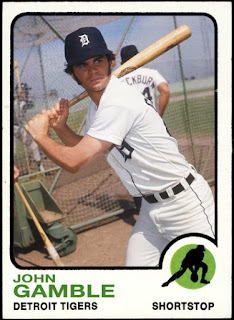 Gamble played in the first six games of what would be a short 13-game career in 1972, going hitless in three at-bats in pinch-hit roles while playing one game at shortstop.
The following year he’d play in seven games for Detroit, oddly enough listed as a designated hitter yet not having a single plate appearance (?), though he did score a run.
Sadly for him that would be it for the Majors, though he would stick it out in the Minor Leagues until the 1976 season in Triple-A ball.
Posted by John23 at 6:09:00 AM