You knew at some point I had to create a 1977 Reggie Jackson Orioles card. And I thought this photo made for a nice version of a card many have created before me: 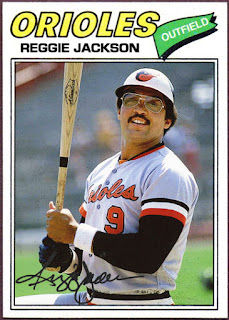 I always felt it was messed up that there was never a card for Reggie really showing him as an Orioles player considering it was a HUGE blockbuster of a trade that sent him to Baltimore right before the 1976 season started.
This was big time news, and coming off of his second home run title (which was a tie with Milwaukee Brewer slugger George Scott), Jackson was in his prime.
Anyway, as well know Topps managed to airbrush him into a “Yankee” uniform, and we got the ugly card that was his 1977 slab. I was never a fan.
So, he we go, with a nice Baltimore Orioles card for the future Hall of Fame slugger and icon of the 1970’s.
On a side-note I always found it interesting that Reggie shared THREE home run titles in his career, in 1975, 1980 and 1982, ALL three with Milwaukee Brewers: George Scott, Ben Oglivie and Gorman Thomas.
Go figure.
Posted by John23 at 6:48:00 AM