Here’s a “not really” missing 1971 Minnie Mendoza card that really came out well, for the long-time minor league player who got a cup of coffee in 1970: 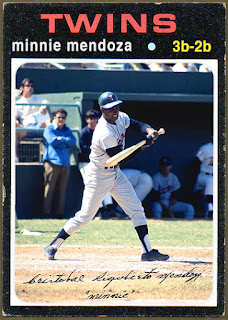 Mendoza FINALLY got to the Majors after 16 years in the Minor Leagues, originally appearing way back in 1954!
In his MLB cup-of-coffee he appeared in 16 games with 16 at-bats, collecting three hits and batting .188.
But don’t let those numbers fool you. This guy flat out HIT in his 20 years in the Minor Leagues, collecting 2462 hits and batting .290!
Granted, most of his hitting was in the lower levels, but I’m curious as to why he didn’t get more of a shot in the Major League level after some really fine seasons.
After his brief ZMLB appearance he was back in the Minors until the 1973 season, where he played for Monterray in the Mexican League at the age of 39.
Pretty interesting career to look into!
Posted by John23 at 5:45:00 AM