The next “Decade Leader” card for the 1960’s is Earned Run Average, sporting a couple of all-time low E.R.A.’s no matter what the decade: 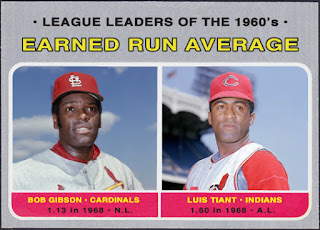 Of course for the National League we have St Louis Cardinals great Bob Gibson, who posted one of the lowest E.R.A.’s in history at 1.13.
He achieved this with help from no one else but himself, as he posted 13 shutouts accounting for all but nine of his 22 wins, yet the guy STILL lost nine games that season!
He completed 28 of 34 starts, almost threw nothing but zeros in HALF of them, yet still came up with nine losses. Incredible!
Of course he would take home the Cy Young Award AND MVP for the N.L. For his troubles, along with his fourth Gold Glove and fifth all-star nod, on his way into the hallowed doors of Cooperstown.
Over in the American League, the decade’s lowest ERA was posted by “El Tiante” Luis Tiant, who was sadly overshadowed in the “Year of the Pitcher”, but would have EASILY taken home a Cy Young had he posted the numbers he did any other season.
All Tiant did that season for the Cleveland Indians was go 21-9 with nine shutouts over 32 starts, 19 of which he completed, and sport a sparkling 1.60 E.R.A. along with 264 strikeouts!
Forget Cy Young Award, those are MVP numbers!
However, there was a guy named Denny McLain winning 31 games for the eventual World Champion Detroit Tigers, so Tiant went home empty-handed.
He would actually go on to struggle over the next three seasons until making an awesome comeback with the Boston Red Sox in 1972, once again leading the A.L. In E.R.A. With a sub-2.00 figure, this time at 1.91.
He’d be in the Majors to stay after that, pitching through to 1982 and finishing with 229 wins along with 49 shutouts, a 3.30 E.R.A. and 2416 strikeouts over his 19-year career.
Posted by John23 at 5:36:00 AM