Here’s a “missing” 1975 card for former Milwaukee Brewer Rob Ellis, who appeared in 22 games during the 1974 season: 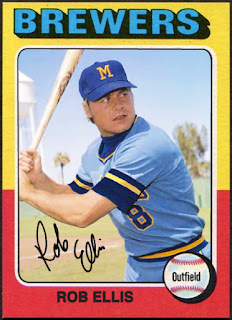 Ellis played mainly in the outfield over those 22 games, along with a single game at Third, while batting a very respectable .292 with 14 hits in 48 at-bats.
It was the first Major League action he saw since his rookie 1971 season when he debuted with 36 games for the second-year franchise.
In 1975 he would play in what would end up being the last six games of his abbreviated three-year career, collecting two hits in seven at-bats while scoring three runs.
All together, he’d finish with a .229 lifetime average with 38 hits in 166 at-bats, all while a member of the Milwaukee Brewers.
Posted by John23 at 5:34:00 AM