Here’s the next “Future Star” card in my imagined 1978 sub-set, Los Angeles Dodger great Steve Garvey, who put together (in my opinion) a Hall of Fame career that had him as the National League all-star first baseman ten times, eight of them consecutively: 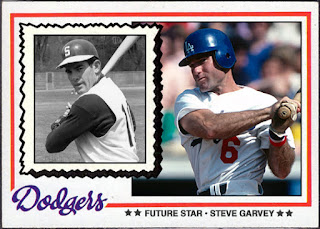 Coming out of Michigan State University, Garvey went on to rack up the hits, the awards and the accolades over his 19-year career.
The National League M.V.P. In 1974, he reached 200+ hits six times, 100+ runs batted in five times, and batted .300+ seven times.
The four-time Gold Glover would also finish in the Top-10 in M.V.P. voting four times during his career, including a second place finish behind Dave Parker of the Pittsburgh Pirates in 1978 to go along with his award from ‘74.
By the time he retired in 1987, he collected 2599 hits, 272 home runs, 1308 runs batted in and a .294 career average with five World Series appearances, including one championship in 1981.
In the post-season he batted .338 with 75 hits and eleven home runs with 31 runs batted in spread over 55 games!
Call me crazy, but when he retired I pretty much figured he was a LOCK for the Hall, expecting him to even be a first or second-year inductee!
Posted by John23 at 6:42:00 AM