Here’s the next 1975 “In Action” card, this time it’s Mets ace Tom Seaver, who was on his way to a third Cy Young Award by the time the season was over: 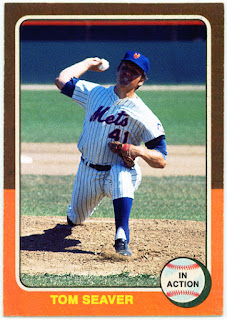 After posting a record of 11-11 in 1974, Seaver came back with a vengeance in 1975, going 22-9 with a 2.8 earned run average and 243 strikeouts, leading the league in wins and K’s.
He was in prime form in the mid-70’s, putting together nine straight 200 strikeouts seasons while getting tabbed to ten all-star teams in his first eleven seasons.
Of course, being in your prime didn’t mean that the improbable could happen, as Mets fans found out on June 15th of 1977 when Seaver found himself traded to the Cincinnati Reds for four players, which at the time seemed like the rich (Reds) were getting richer.
But as baseball has shown everyone many times, having a team that is STOCKED doesn’t translate to championship seasons every time, as the Reds suddenly found themselves second-fiddle to the Los Angeles Dodgers in the West, never making it to the World Series with Seaver on their team.
Nevertheless, Seaver would ride his power-pitching straight to the Hall of Fame, finishing up with 311 wins, a 2.86 E.R.A., 61 shutouts and 3640 K’s.
Posted by John23 at 6:47:00 AM