Today’s “Negro league Legend” is none other than arguably the most well-known star and personality of them all,  pitching great Satchel Paige: 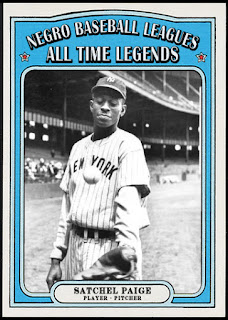 From his start as a 20-year old playing for the Birmingham Black Barons in 1927 to his final Major League appearance as a 59-year old for the Kansas City Athletics, Paige became an American icon not only for his on-field play but for his infectious personality.
Though his career Negro League record is listed as 100-50 over 18-seasons, he won countless other games along the way, as was the usual for the Negro Leagues as they played exhibition and non-league games during gaps in their schedule.
His stories are legend, enough so that by the time the Baseball Hall of Fame got off their ass and finally began electing Negro League all-time greats to Cooperstown, Paige was the very 1st to be so honored.
A 5x time Negro League all-star, 2x American League all-star, Negro League champ in 1942 with the Homestead Grays, and Major League World Champion with the 1948 Cleveland Indians, Paige left a baseball legacy that few could come close to.
If you haven’t already please do yourself a favor and read up on anything you can regarding the anecdotes on Paige, from BOTH his Negro league days through to his Major League tenure!
Honestly, if I were to go and write a full bio on the guy, it would end up being a BOOK! So forgive the relatively short write-up here.
Some guys are such legends there really isn’t much that needs to be said...
Posted by John23 at 6:29:00 AM