FANTASY 1976 CARD: ROLLIE FINGERS AND THE SALE THAT WASN'T

Came across a very nice shot of Rollie Fingers in Boston Red Sox garb and just had to create a card for him and the sale that never was: 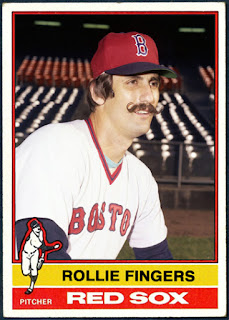 For those of you who are not familiar, Oakland A’s owner Charlie Finley was facing a HUGE problem with Free Agency on the horizon for all of his stars, including his top reliever Rollie Fingers.
Rather than lose them all to the highest bidder, he was determined to cash in ahead of time, and decided on somewhat of a fire sale.
This included selling pitcher Vida Blue to the Yankees for $1.5 million, and Joe Rudi along with Fingers to the Red Sox for $1 million apiece.
However, once the sale went through Baseball Commisioner Bowie Kuhn came along and determined that these sales were NOT in the best interest of the sport, and nullified the deals.
Fingers was a member of the Red Sox for just three days, from June 15th-18th, and never appeared in a game.
It was back to Oakland for him where he’d finish up the 1976 season with a 13-11 record along with a 2.47 earned run average over 70 games, with 20 saves in 134.2 innings pitched.
Just as Finley feared, he lost the core of his three-peat championship club to free agency, including Fingers who signed with the San Diego Padres where he’d star for the next four seasons, pacing the National League in saves his first two years with 35 and 37 respectively.
Of course he’d go on to finish a Hall of Fame career with four years with the Milwaukee Brewers, ending up at 341 saves with a 2.90 ERA and 114 wins over 944 games, all but 37 of them out of the bullpen.
Posted by John23 at 5:40:00 AM