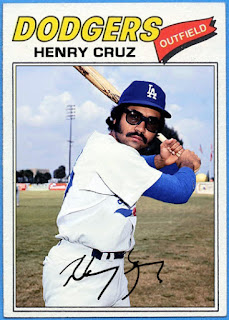 Cruz appeared in 49 games for the Los Angeles Dodgers during the 1976 season, batting .182 with 16 hits in 88 at-bats while playing all three outfield positions.
He’d find himself in the South Side of Chicago for the ‘77 season, being selected off waivers by the White Sox on September 7th, and for whom he’d play the next two years before playing out his pro career in the minor leagues and Mexico through 1985.
Oddly enough, before being selected by the White Sox in 1977, he was tearing it up in the Pacific Coast League with the Albuquerque Dukes, batting .353 with 88 ribbies and 95 runs scored in 133 games, easily his finest pro season.
Posted by John23 at 6:07:00 AM