The next “Baseball Brothers” card in my on-going sub-set through the 1970’s are the Allen brothers, Dick, Hank and Ron, who all made it to the “Big Show”, with Dick of course leading the way as a bonafide star: 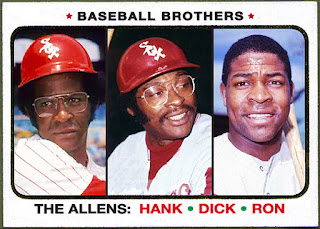 Dick, then known as “Richie”, made it to the Majors first and made an immediate impact, winning the National league Rookie of the Year Award with one of the all-time rookie campaigns, hitting .318 with a league-leading 125 runs scored and 13 triples, with 38 doubles, 29 homers and 91 runs batted in.
He’d go on to play 15-years while picking up an American League MVP Award (just missing a Triple Crown title), along with seven all-star nods.
He would top 30 homers six times, leading the league twice with 37 and 32 respectively in 1972 and 1974 while with the Chicago White Sox.
Though the oldest of the trio, Hank made it to the big league in 1966 and put together a seven year career playing for the Washington Senators, Milwaukee Brewers and Chicago White Sox along with Dick.
Never a full-time player, he’d finish with a .241 batting average along with 212 hits in 881 at-bats in 389 games.
It’s worth noting that once drafted by the Philadelphia Phillies, he tore up the minor league system between 1960 and 1966, knocking in 100+ runs three times and topping 20 homers three times, with a high of 37 in 1962 along with 140 RBI’s.
The youngest of the three Allen brothers, Ron just had a cup of coffee in the Majors in 1972, playing seven games with the St. Louis Cardinals during the month of August and hitting a home run for his only hit.
I don’t know why, but 1972 would be his final season as a pro Majors or Minors, and I wonder why since he was only 28 at the time. Would love to know more about him and what happened, if anything.
Nevertheless I'm always amazed when two brothers, let alone THREE or more, make the Major Leagues or any other pro sport. Awesome.