The next “Future Star” card in the series is that of eventual Hall of Fame pitcher extraordinaire Tome Seaver, who was in the middle of his first full season as a Cincinnati Reds player after his heart-breaking trade (to us New Yorkers anyway) the previous season: 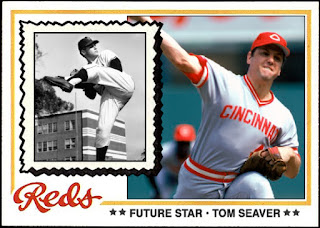 Though he didn’t put up the numbers that made him one of the game’s best while the ace of the New York Mets between 1967 and midway through the 1977 season, he was still effective, averaging 12 wins per season, including what should have been a FOURTH Cy Young season during the strike-shortened 1981 campaign.
That year he went 14-2 with a .875 winning percentage (both league leading numbers), along with a sparkling 2.54 earned run average and 87 strikeouts over 23 starts and 166.1 innings.
Of course, the world was wrapped up in “Fernando-mania”, so Valenzuela wound up with the award, just one of the short-ends the Reds got when you consider they had the BEST record in baseball in 1981, but because of that ridiculous “split-season” ruling they didn’t even qualify for the playoffs since they weren’t in 1st place at the beginning of the strike or at season’s end (figure that one out!).
Anyway, Seaver was a star baseball player before he was even a pro, commanding HUGE attention during his college days, eventually leading to some controversy when he originally signed with the Braves in 1966, only to have the signing voided, allowing the New York Mets to make arguably the best pick in franchise history in the 1966 amateur draft.
The man would end up 311-205 record with 61 shutouts and 3640 strikeouts along with a brilliant 2.86 ERA over 20-seasons and 656 appearances, 647 of which were starts.
The man WAS 1970’s power-pitching along with Nolan Ryan!
Posted by John23 at 6:34:00 AM