Next up in my 1960’s “Seasonal Leaders” thread is shutouts, and we have a couple of doozies at the top of the decade, Bob Gibson and Dean Chance with their excellent seasons in 1968 and 1964 respectively: 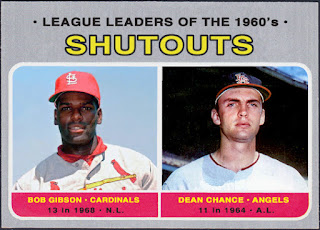 Of course, Bob Gibson had a season for the ages in ‘68, throwing 13 shutouts on his way to a microscopic 1.13 earned run average and a 22-9 record. Though how on earth he had NINE losses is beyond me even though I read through all the box scores! It just seems impossible to do!
But in the “Year of the Pitcher” of 1968 all sorts of craziness happened, and Gibson’s loss total was one of them.
The 13 shutouts is good for second all-time in Major League history, tied with Jack Coombs of the Philadelphia Athletics in 1910, and only behind the 16 thrown by Grover Alexander in 1916 and George Bradley in MLB’s inaugural season of 1876.
For Dean Chance, his Cy Young winning 1964 season was also one for the ages, as he cruised to a 20-9 record with a minuscule 1.65 ERA and 11 shutouts over 46 games, with 35 of them starts.
The 11 shutouts are the fourth highest total by a pitcher in any MLB season, and was accomplished by eight hurlers, with only Chance and Sandy Koufax doing it in “modern” times.
As a matter of fact, since Gibson’s 13 shutouts in ‘68, only TWO pitchers have reached double-digits since then, Jim Palmer with 10 in 1975 and John Tudor with the same amount in 1985.
Tim Belcher is the last pitcher to throw as many as eight shutouts in a season, which he accomplished in 1989, a season in which he only posted 15 wins. More than half of his wins were shutouts. Amazing.
Posted by John23 at 6:05:00 AM