Today we add the legendary slugger Josh Gibson to my “Negro Leagues Legends” 1972 sub-set, celebrating what was at the time the 25th anniversary of Jackie Robinson’s breaking the color-line in Major League baseball: 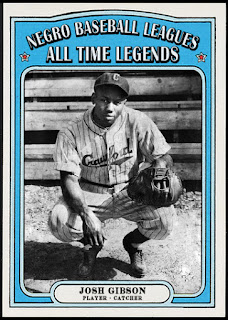 Really, what needs to be said about one of the all-time baseball (of ANY league) legends anyone has ever seen?
I remember when I was a kid in the late-70’s/early-80’s, before the internet and information at the tips of your fingers, I would see that image of Gibson in the Guiness Book of World Records, along with their statement that he clubbed over 800 home runs during his playing career, as well as over 70 in a season, and just marvel and wonder about the “what if’s”.
What a treat it would have been to have fully documented numbers and achievements by Gibson against all players. Luckily what we do have are his numbers against his fellow Negro National League players, and they were just as amazing!
By the time Gibson retired at the young age of 34 in 1946, he put up a career average of .350, with 107 home runs in 1825 at-bats. Mind you, this doesn’t take into account all the home runs he blasted in other games such as the Dominican, Mexican, and Cuban (Winter League) games!
Informally, Gibson is credited with a .359 career average with 962 homers, hitting as many as 69 in 1934 and 55 the year before, including barnstorming games.
There’s so much I could write here, but for those who haven’t already, just read up on ANYTHING you can regarding Gibson’s career, it’ll blow your mind, including some of the anecdotes, and you’ll see why he’s considered not only one of the greatest catchers of all-time (in any league), but one of the greatest players, period.
Sadly, he passed away at only 35 years of age, never really seeing all the accolades that would come his way after he was no longer with us.
Such a shame.