The next player featured in my on-going 1975 “In-Action” sub-set is the one and only Jim Palmer, 3-time Cy Young winner and ace of the Baltimore Orioles pitching staff for almost 20-years: 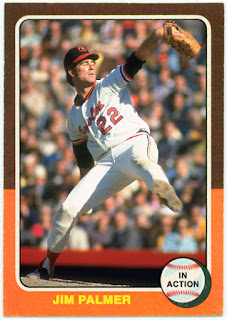 Though coming off of an uncharacteristically season in 1974 that saw him go 7-12 in only 26 games, he still posted an E.R.A. Of 3.27 with a couple of shutouts.
But of course that wasn’t the Jim Palmer we were used to, because for four years before AND after that season, he’s post 20-wins each and every time, as well as E.R.A.’s under 3.00 while racking up shutouts, innings and awards, including the aforementioned Cy Youngs, four Gold Gloves, six all-star game nods and an 8-3 postseason record with three championships.
Palmer will always be considered one of the era’s great pitchers, along with guys like Tom Seaver and Steve Carlton, the other 3-time (four for Carlton) Cy Young winners of that time period.
Just an amazing career.
Posted by John23 at 6:14:00 AM