Next up in my “Major League Founders” thread is former infielder Joe Battin, who played 10 scattered years as a professional player between 1871 and 1890: 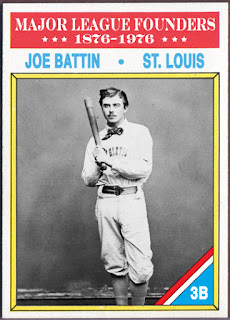 Battin originally came up for a single game for the Cleveland club of the National Association in 1871 at the age of 17, followed by a single game two seasons later for the Philadelphia Athletics before finally becoming a full-time player in 1874.
An early “good-field/no-hit” player, he played in the Major Leagues’ first two seasons in 1876 & 1877, putting in his best season at the plate during the inaugural 1876 campaign when he batted .300.
Considering his next highest batting average as a pro would be the .250 he hit the year before, that .300 average was indeed an aberration.
He would be out of pro-ball until 1882 when he played for the Pittsburgh club of the American Association, for whom he’d play the next season as well.
In 1884 he’d play for no less than three clubs, in both the AA and Union Association, batting a cumulative .164 average while playing shortstop.
Again, he’d miss a few seasons before coming back to pro-ball in 1890, his last action as a Major League player, when he’s suit up for Syracuse of the AA at the age of 36, batting .210.
Posted by John23 at 5:38:00 AM