The next 1975 “In-Action” card in my series is none other than the great Johnny Bench, smack in the middle of his incredible career leading the “Big Red Machine”: 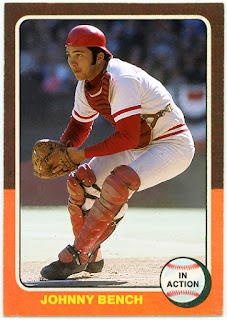 Bench already had two MVP’s under his belt by the time this card would have hit the market, and was just about to become a two-time world champion with two straight World Series wins in 1975 and 1976 against the Boston Red Sox and New York Yankees respectively.
He would put together a career rarely seen by ANY player, let alone a catcher: 14 all-star games, 10 Gold Gloves, two home run titles and three RBI titles, all while donning the “tools of ignorance” for 17 seasons, all with the Reds.
Look for my “Nicknames of the 70s” card for the “Little General” coming soon!
Posted by John23 at 5:49:00 AM