Here’s a new thread I’m starting that’s going to be really fun to put together, a 1975 “In Action” sub-set just like Topps did in 1972.
The first player will be Boston Red Sox legend Carl Yastrzemski: 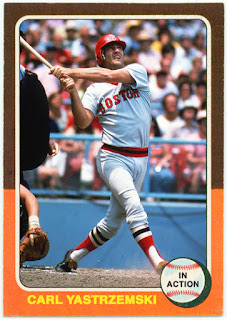 With so many great in-action cards in the 1975 set, it always bothered me that so many of the stars DIDN’T have action cards, so I figured I’d find some good in-game photos of the day’s best players and run a sub-set that was clean, devoid of “extra” type, and focused on the photo itself.
Of course, Yastrzemski by 1975 was smack in the middle of his Hall of Fame career, but still an all-star and feared American League batter.
It was a transition season of sorts for Yaz and the Red Sox, as the veteran slugger was giving way to young upstarts like Fred Lynn, Jim Rice and Dwight Evans, players who’d carry on what Yastrzemski took over from Ted Williams in the early 1960’s.
Of course, that 1975 season was a magical one for the Boston organization, with the team playing (though losing) against the “Big Red Machine” Cincinnati Reds in the World Series, and having BOTH the Rookie of the Year and Most Valuable Player in the form of the same player, Fred Lynn, that being the first time in Major League history that happened.
Throw in a player that would end up in the Hall of Fame in Jim Rice, a borderline Hall of Famer in Dwight Evans, and of course the future Hall of Fame catcher Carlton Fisk, and you have a team that defined "loaded".
Posted by John23 at 5:50:00 AM