Here’s a “not so missing” 1972 card for Rudy Arroyo, who pitched the sole nine games of his Major League career in June of 1971: 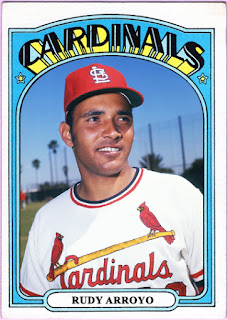 Arroyo would make his debut on June 1st, and end up pitching his last game three weeks later, pitching 11.2 innings over those nine games, picking up a loss for his only decision along with a 5.40 ERA.
He’d pitch in the minor leagues for the next three seasons, but would never make it back to the big leagues, eventually retiring after the 1974 season after only six games with St. Petersburg of the Florida League.
Posted by John23 at 7:02:00 AM