On the blog today we have a fun "not so missing" 1973 card for former catcher Sonny Ruberto, who saw the last Big League action of his brief career in 1972 with the Cincinnati Reds: 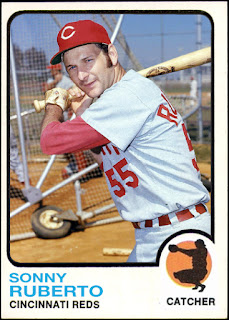 Ruberto, whose only other Major League time was in 1969 with the San Diego padres during their inaugural season, appeared in only two games for the National League champion Reds in 1972, going 0-3 at the plate.
Back in 1969 he played in 19 games as a 23-year-old for the new Padres franchise, hitting .143 with three hits in 21 at-bats.
Surrounding that brief Big League action were 13 seasons toiling in the Minors for both the St. Louis Cardinals and Reds between 1964 and 1976, leaving the game as a player at the age of 30.

From there he would go on to manage and coach in the St. Louis organization before sadly passing away in 2014 from cancer at the age of 68.