On the blog today we have a 1973 "not so missing" card for three-year Major League outfielder Jimmy Rosario, who barely saw any action during the 1972 season with the San Francisco Giants: 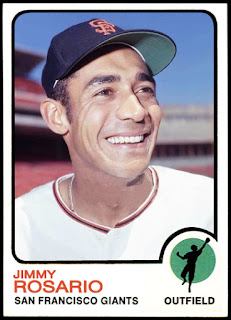 Rosario was coming off a rookie season in 1971 that saw him play in 92 games, hitting .224 over that time.
Sadly for him, 1972 wasn't as eventful as he appeared in only seven games for the Giants, going 0-2 at the plate with a run scored.
Turns out he would spend the next three years in the Minor Leagues before making it all the way back to the Big Leagues in 1976, now a member of the Milwaukee Brewers, appearing in 15 games and hitting .189 with seven hits in 37 at-bats.
The following year he would go on to the Japanese League where he’d play for the Crown Lighter Lions before playing out his pro career with five seasons in the Mexican League until the age of 37 in 1982.
Posted by John23 at 5:32:00 AM