Up on the blog today is a 1971 "Minor League Days" card for longtime New York Yankees ace, and underrated pitcher Mel Stottlemyre, who was finishing up a very nice final season in the Minor Leagues when this photo was taken: 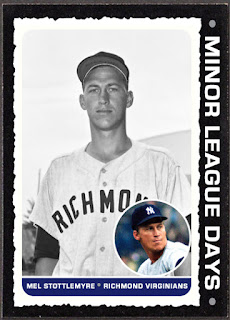 Stottlemyre would go 13-3 for the Richmond Virginians in 1964 before getting called up for his first shot at the Big Leagues.
Along with that sterling record he also pitched to an incredible 1.42 earned run average over 30 appearances, 17 of them starts, while tossing two shutouts while striking out 95 over 152 innings.
Once in the Majors that year, he would add another nine wins, going 9-3 for the American League champions before they fell to the St. Louis Cardinals in the World Series.
Sadly for Stottlemyre, he made his Major League debut at a time that saw the Yankees fall from the league elites, not making another World Series, or even finishing in first place, for the rest of his 11 year career.
But no one can say it was because of their young star pitcher, as Stottlymyre would go on to post three 20-win seasons while also finishing five seasons of sub-3.00 ERA's, while throwing 40 shutouts,
By the time he retired after the 1974 season because of injuries, he would win 164 games in only 9-plus seasons of work, while making five All-Star teams.
When you look at his numbers and realize that he only had nine full seasons in the Big Leagues, they definitely grow in stature.
Of course we know that he later went on to become one of the most respected pitching coaches in the Majors from the 1980-s with the Mets on through to the "new" Yankee dynasty in the late-90's/early-00's, before retiring for good after the 2008 season.
Posted by John23 at 6:32:00 AM