On the blog today, we have a "not so missing" 1977 card for former outfielder Larry Murray, who just came off his third season of tasting the Big League life in 1976: 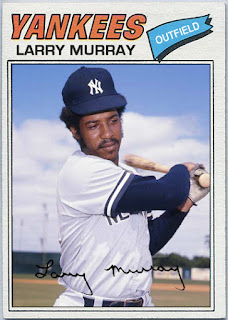 Murray appeared in eight games for the Bronx Bombers during the Bicentennial year after two seasons of six games apiece in 1974 and 1975.
Over those eight games he collected one hit in ten at-bats, the first hit of his career, along with two runs scored and a run batted in.
The next year would find him as a member of the Oakland A's, where he would hit .179 with 29 hits over 162 at-bats after coming over as part of the deal that got them Mike Torrez.
He also scored 19 runs while stealing 12 bases while getting the first real taste of significant play after never getting any playing time with New York in the previous three years.
However, in 1978 he’d only play in eleven games, hitting .083 with a single hit over twelve at-bats, while coming back in 1979 and get the most playing time he’d see over a season when he appeared in 105 games, hitting .186 with 42 hits over 226 at-bats.
That action would get him his first Topps card in the 1980 set, only to never appear in a Major League game again.
After only 13 games in the Minor Leagues during the 1980 season, he’d be finished with pro ball, only 27 years of age.
Go figure.
Posted by John23 at 7:31:00 AM