Fun card to add to the WTHBALLS collection, a "not so missing" 1978 card for four-game Major Leaguer Tony Chevez of the Baltimore Orioles, whose entire Big League career spanned a couple of weeks in June of 1977: 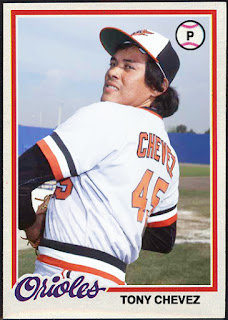 Chevez never picked up a decision over that time, throwing eight innings while pitching to an earned run average of 12.38.
He would never get the call back up to the Majors, though he would pitch another two years in the Orioles' minor league system before retiring for good in 1979, playing the entirety of his professional career for Baltimore.

Apparently, it was that fourth Major League appearance in which he hurt his arm, thereby pretty much ending his career, one that made him only the second Nicaraguan to ever play Major League ball, behind Dennis Martinez, also of Baltimore.