On the blog today we have the newest addition to my 1971 "Minor League Days" thread, pitcher Jim Kaat, who was finishing up his brief Minor League career before embarking on a Hall of Fame worthy 25-year Major League career in 1960 as a member of the Charleston Senators: 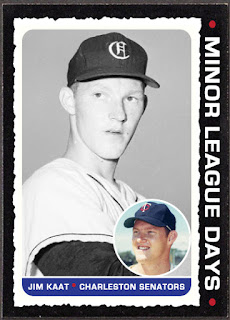 Kaat would go 7-10 in his only season with Charleston in 1960, with a 3.82 earned run average over 30 appearances and 146 innings of work.
The following year he would be a full-time Major Leaguer, appearing in 36 games for the Minnesota Twins and posting a record of 9-17, with an ERA at 3.90 along with eight complete games and 200.2 innings pitched.
All the guy would end up doing in his Big League career is win 16 Gold Glove awards, with 283 wins, 31 shutouts and 2461 strikeouts in 898 games, 625 of them starting between 1959 and 1983, easily getting some arguments for a Hall of Fame spot.
Post playing career he would also coach, and move on to broadcasting where I absolutely enjoyed his Yankees game announcing, giving brilliant and entertaining insight into situations and historical angles that only a 25-year Big League pitcher could offer.

Definitely one of my favorite Baseball personalities over the years.