Today's blog post has New York Yankees great Thurman Munson added to my long-running "Minor League Days" 1971 sub-set, though for him those days were not that far behind when this card would have seen the light of day: 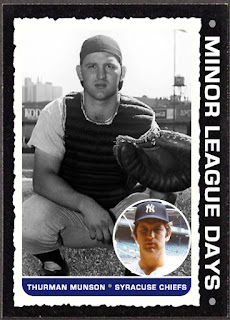 The young catcher was already an American League Rookie of the Year, which he took home the previous season, giving the struggling franchise a glimmer of hope that would pay off later on when he'd help lead them back to glory, winning two straight championships in 1977 and 1978.

His stretch between 1975 and 1978 is also incredible since he averaged about 185 hits over the four-year span, something I believe hasn’t been matched by any other MLB catcher before him, and only Ivan Rodriguez since.
Such a great career cut short by tragedy, though as I recall, Munson was seriously considering retirement by the end of the decade because of nagging injuries and missing his family because of the grind of a full-season.
Nevertheless, a Rookie of the Year in 1970, an MVP in 1976, and two straight championships in 1977 and 1978.
A wonderful career for the New York Yankees legend.
Posted by John23 at 7:19:00 AM