Any time I can create a card for a guy who appeared in only a handful of games during his Major League career, I jump right to it! And today's blog entry is just that, a "not so missing" 1979 card for  eight game Big Leaguer Scott Meyer of the Oakland A's: 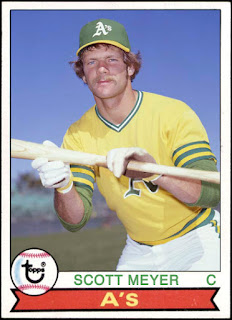 Meyer's entire Big League run was during the month of September 1978, with his last game coming on October 1st.
Over that scant time in the Majors he went 1-for-9 at the plate with that hit being a double, along with a run scored and four strikeouts while catching in seven of those contests.
In only his first year of pro ball, the 20 year old would sadly never get another call up to the Majors after that, spending the next three years in the Oakland system before retiring for good after the 1981 season.
Posted by John23 at 6:38:00 AM