Up on the blog today, how about a "not so missing" 1977 career-capper for Adrian Garrett, who played the last games of his eight-year Big League career in 1976 as a member of the California Angels: 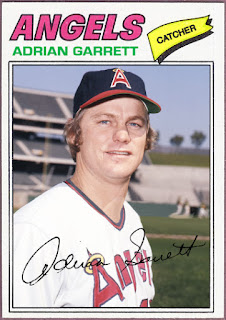 Garrett appeared in 29 games for the Halos during the Bicentennial year, hitting .125 with six hits over 48 official at-bats.
It was a typical season for the catcher-outfielder, as he would never have even close to a full season of action over his career which began in 1966 with four games as an Atlanta Brave.

He would play for four organizations: Atlanta Braves, Chicago Cubs, Oakland A’s and California Angels, ending up with a .185 batting average with 51 hits in 276 at-bats in 163 games, with 30 runs scored, 11 homers and 37 runs batted in.