Up on the blog today is the first American League All-Star from 1969 to get a "fix" on their 1970 Topps card, starting All-Star catcher Bill Freehan, who in my opinion should be in the Hall of Fame as the best catcher in his league for a significant amount of time: 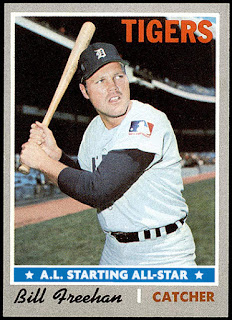 Really, Freehan does NOT get enough credit for being the best backstop in the A.L. during the 1960's into the 1970's before guys like Carlton Fisk and Thurman Munson came along.
The man was an eleven-time All-Star, five-time Gold Glover and received MVP consideration six times, finishing third and second respectively in 1967 and 1968.
A solid player through and through, he'd retire after the 1976 season with a .262 lifetime average, 200 homers and 758 runs batted in over 1774 games and 6073 at-bats and finished with a .993 fielding percentage while donning the "tools of ignorance".
Really, I need to give Freehan more attention on this blog.
Look for some other customs here in the near future!