It has been nearly three years since I've added a player to my "Negro League Legends" thread, so today I present a card for Ben Taylor, former first baseman and manager: 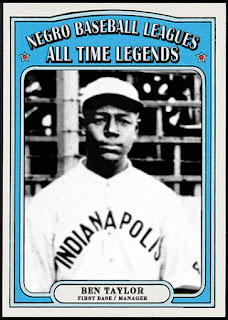 Taylor spent over 20 years playing in the Negro leagues, beginning with the Birmingham Giants in 1908 through to the Baltimore Black Sox in 1928, while managing until 1938 when he led the Washington Black Senators.
Originally a pitcher when his career began, he eventually established himself playing for his brother. C.I. Taylor, who managed and owned the Indianapolis ABCs.
According to record books, Taylor hit .300 or better in all but one of his first 16 seasons, and even went on to mentor young Buck Leonard at first base.
He finished his career with a .318 batting average, hitting as high as .371 in 1922 with Indianapolis, while scoring 410 runs and driving in 354.
He also ended with a record of 8-6 as a pitcher, with a 4.30 earned run average over 24 appearances and 161.1 innings of work.
In 2006 he was given his rightful place in Cooperstown, being selected by the "Committee on African-American Baseball".
Posted by John23 at 6:35:00 AM