On the blog today we have a "not so missing" pre-rookie card for former New York Mets pitcher Roy Lee Jackson, who made his Major League debut during the 1977 season: 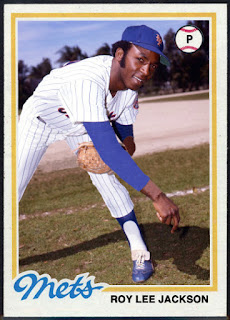 Jackson appeared in four games for the Mets, going 0-2 with a 6.00 earned run average over 24 innings of work as a 23-year-old.
He'd pitch another three years with the Mets, never really becoming a full-timer until joining his second team, the Toronto Blue Jays in 1981, where he became a dependable arm out of the bullpen over four seasons.
In 1985 he joined the San Diego Padres for a season, going 2-3 with a nice 2.70 ERA over 22 games before playing what turned out to be his last Big League action in 1986 with the Minnesota Twins, going 0-1 over 28 games with a 3.86 ERA.