The next 1970 card to get the "on-card all-star" banner is New York Mets outfielder Cleon Jones, who had himself quite a season in 1969, including starting for the National League in that year's "Midsummer Classic": 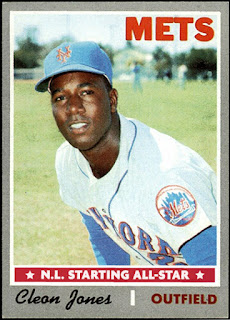 Jones was on his way to a career-year, finishing up with a .340 batting average, along with 92 runs scored and 75 runs batted in and 164 hits, all career-bests, while helping lead the surprising Mets to their improbable World Championship over the heavily favored Baltimore Orioles.
Those numbers got him a seventh-place finish in MVP voting, and a lot of love in NYC among Mets fans.
Jones would play twelve of his 13-years in the Major Leagues with the Mets, finishing up in 1976 with a scant twelve games playing for the Chicago White Sox.
He'd finish with a .281 career average, with 1196 hits in 4263 at-bats over 1213 games, and of course that World Championship with the 1969 "Miracle Mets".
Posted by John23 at 6:42:00 AM