On the blog today, a "not so missing" 1973 career-capper for four-year Major League infielder Syd O'Brien: 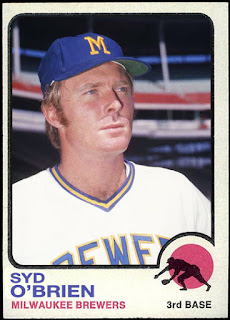 O'Brien split what turned out to be his last season as a Big Leaguer with the California Angels and finally the Milwaukee Brewers, appearing in 67 games, collecting 19 hits in 97 at-bats, good for a .196 batting average.
Originally up in 1969 as a member of the Boston Red Sox, he would also play with the Chicago White Sox in 1970, the Angels in 1971 and the aforementioned split season in 1972.