On the blog today, a "not so missing" 1975 card for former Montreal Expos Warren Cromartie, who was just beginning his very nice Major League career with a handful of games during the 1974 season: 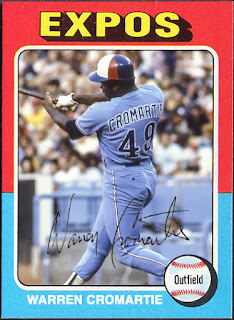 Cromartie appeared in eight games for the Expos that season, hitting .176 with three hits over 17 at-bats, with two runs scored and a stolen base.
He would spend all of 1975 in the Minors before making it back in 1976, which led to a very nice 10-year Big League career.
What a great young team those Expos had! Along with Cromartie, you had Andre Dawson and Ellis Valentine coming up around the same time as well, giving Montreal quite a stud outfield.
Cromartie would have some solid years in the latter half of the 1970’s, collecting no less that 1972 hits in each season between 1977 and 1980, along with 30+ doubles and averaging about a .285 batting mark for the period.
But, after finding himself out of the Major Leagues prematurely in 1984, he would sign with the Yomiuri Giants in Japan and put in some monster seasons through 1990, even winning the league’s MVP Award in 1989 after batting .378 with 15 homers and 72 runs batted in.
After another solid 1990 season, he was invited by Kansas City to come to Spring Training, at the age of 37, eventually batting .313 in limited play before retiring for good after 69 games.
Quite a baseball adventure for the fan favorite in Montreal.
Posted by John23 at 6:13:00 AM