Today's blog post has a "not so missing" 1973 card for former catcher Dennis Paepke of the Kansas City Royals, his second "missing" card here on the blog over the years after a 1972 edition  almost five years ago: 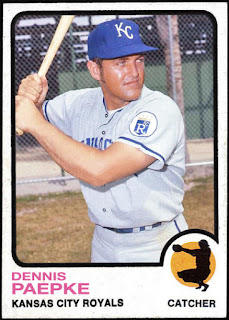 Paepke appeared in only two games for Kansas City in 1972, going 0-for-6 at the plate with a walk and two strikeouts.
He would spend all of 1973 in the Minors before making it back in what turned out to be the last action he'd see in the Majors with six games in 1974, collecting two hits in 12 at-bats.
Paepke actually appeared on a multi-player rookie card in the 1970 Topps set after playing in a dozen games during the inaugural 1969 season.
After being stuck in the minors for 1970, he made it to the big leagues again in 1971 and played in 60 games for the Royals, collecting 31 hits over 152 at-bats, good for a .204 average while splitting time behind the plate and out in the outfield.

But that would be the sum total of his Big League time, finishing up with a career .183 batting average with 36 hits in 197 at-bats over 80 games.