Today's blog post has a "not so missing" 1971 card for former pitcher Julio Navarro, who made it back to a Major League mound in 1970 after three years toiling in the Minors between 1967 and 1969: 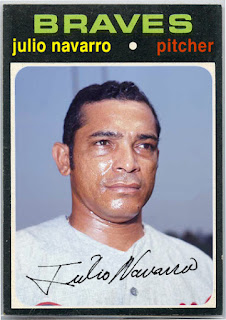 Navarro appeared in 17 games with the Atlanta Braves, not factoring in a decision along with a 4.10 earned run average over 26.1 innings of work.
It was his first taste of Major League ball since 1966 when he appeared in a single game for the Detroit Tigers, giving up three earned runs without retiring a batter for an "infinite" ERA.
Originally up in 1962 with the Los Angeles Angels, he would leave the Big Leagues behind and go on to play in the Mexican League from 1972 through 1974 before retiring for good at the age of 40.
For his Major League stint, he finished with a record of 7-9, with an ERA of 3.65 over 130 appearances and 212.1 innings pitched, with all but one appearance out of the bullpen, picking up 17 saves along the way.