This week we reach the starting 1969 All-Star third baseman for the National League in my new "on-card" All-Star idea, showing the previous years' starting all-stars with on-card designation like my favorite cards of 1975-1981: 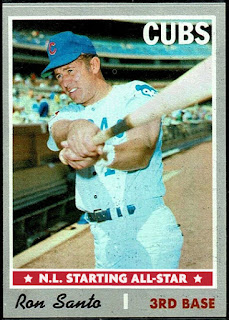 Santo made his sixth All-Star team in 1969, having one of his best seasons in the Big Leagues when he drove in a career-best 123 runs along with 29 homers, 97 runs scored and a .289 batting average.
For his efforts he also finished fifth at the end of the year for N.L. MVP, his second best finish after a fourth place finish just two seasons prior.
Between 1963 and 1973 Santo was selected for nine All-Star games, received five Gold Gloves for his defensive work, and four-time finished Top-10 in the National League MVP race, with a high of fourth in 1967.
Post-playing career, Santo moved on to broadcasting, where he was a beloved color commentator over the years, working with guys like Harry Caray, Thom Brennaman and Steve Stone.
But it was mainly his working relationship with Pat Hughes on the radio that were enthusiastically known as the “Pat and Ron Show”.
Sadly, Santo would die from bladder cancer and complications from diabetes in December, 2010, and would not live to see himself selected for the Hall of Fame, as that would come almost a year later when he was the only player selected by the Golden Era Committee.
Just a crying shame if you ask me.