On the blog today we have a "not so missing" 1975 card for former outfielder Gene Hiser of the Chicago Cubs, who played in a dozen games during the 1974 season: 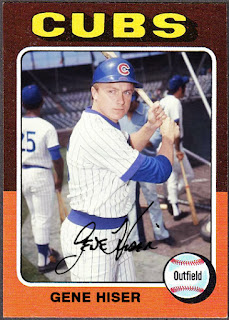 He would spend all of 1976 in the Cubs Minor League system, but would call it a career shortly after.