Today on the blog, we have the next starting All-Star from 1969 to get an "on-card" banner on their 1970 card, starting second baseman for the National League Felix Millan of the Atlanta Braves: 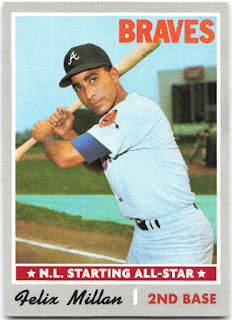 He would put in solid season after solid season for Atlanta over the next three years before getting traded to the New York Mets as part of a deal that got Atlanta pitchers Danny Frisella and Gary Gentry before the 1973 campaign started.
In 1973 he gave the New York Mets an important cog on their way to the National League title before falling to the Oakland A's juggernaut in the World Series.
While with the Mets he again was solid, collecting as many as 191 hits in a season (1975), which would stand for many years as the team record, hitting as high as .290 before a gruesome injury pretty much ended his career in 1977.
After Pittsburgh Pirates catcher Ed Ott tried to break up a double-play, Millan took exception to the slide and exchanged words, leading to Millan striking Ott with his fist.
Ott, who was a former wrestler, literally picked Millan up and slammed him down onto his knee, injuring Millan's shoulder so badly it ended his career. Just like that. Terrible.