Always fun to add a player like this to the "WTHBALLS" checklist! Today we have a "not so missing" 1973 card for nine-game Major League first baseman Terry McDermott of the Los Angeles Dodgers: 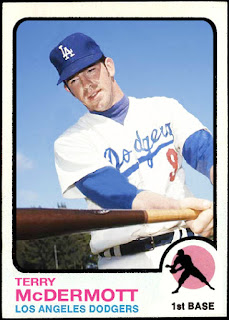 McDermott played the entirety of his Big League career as a September call-up in 1972, collecting three hits over 23 at-bats, which translates to a .130 batting average.
Along the way he also added two runs scored and two walks to go with eight strikeouts over 26 total plate appearances.
He would go on to play through the 1976 season in the Dodgers Minor League system before calling it a pro career, which began in 1969 as an 18-year-old, all for Los Angeles.
Not much of a power hitter, he did put up some nice batting averages over his Minor League career, with a high of .343 the first half of 1972.
Posted by John23 at 5:21:00 AM