The next star player profiled in my long-running 1971 "Minor League Days" sub-set is "Tom Terrific", Tom Seaver, who played his one and only season in the Minors for the Jacksonville Suns in 1966: 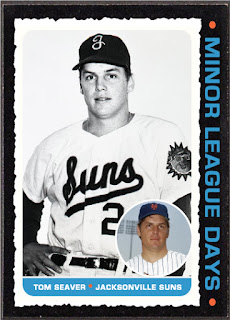 Seaver posted a record of 12-12 over 34 appearances for the Suns, completing 10 games and pitching four shutouts along with 188 strikeouts against only 66 walks.

Of course, the following season he would begin his Major League dominance, taking home the N.L. Rookie of the Year Award, only to be followed with three Cy Young Awards, 12 All-Star nods, and ultimately a Hall of Fame career rarely matched in Big League history.
The man would end up with a 311-205 record along with 61 shutouts and 3640 strikeouts to go with a brilliant 2.86 ERA over 20-seasons and 656 appearances, 647 of which were starts.
God I loved Tom Seaver when I was a kid. More than any other pitcher of that era I was in awe of this man. He just seemed like a "super-hero" to me.