This week's addition to my 1971 "Minor League Days" sub-set is future Hall of Famer Reggie Jackson, who wasn't too far removed from HIS Minor League days by the time this card would have seen the light of day: 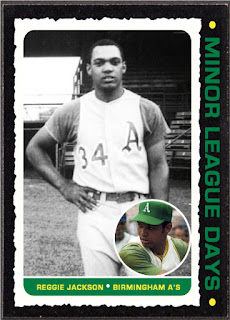 The young budding All-Star was 21-years-of-age when this photo was taken, showing him with the Birmingham A's, a team for whom he hit .293 with 17 home runs and 58 runs batted in over 114 games in 1967.
Of course, a year later we all know he'd be a starter in the Major Leagues, hitting 29 home runs and even getting some MVP attention before really exploding onto the Big League scene with a 1969 campaign that saw him hit a career-best 47 home runs, along with 123 runs scored and 118 RBIs, finishing fifth in MVP voting.
The man was just destined for baseball greatness since his days at Cheltenham High School in Pennsylvania.
Recruited by pro teams and colleges alike, he went on to Arizona State where he was actually on a football scholarship.
Of course we all know the story of the 1966 amateur draft, where the New York Mets held the #1 pick, and opted for high school catcher Steve Chilcott instead of who many considered the true #1 overall amateur, Jackson.
With the second pick, the Kansas City Athletics (later Oakland) picked the slugger and the rest is history, as he would eventually lead the organization to three straight championships between 1972-1974 before being traded in a blockbuster to the Baltimore Orioles where he’d play for one season in 1976.
As a highly coveted free agent before the 1977 season, Jackson signed with the New York Yankees, and with Reggie in NYC, the legend exploded as he helped the Yankees to two championships in 1977-78.
With his larger than life persona, New York ate it up and before you knew it, he was known around the world, even getting his own candy-bar by the end of the decade.
For a kid like me growing up in Brooklyn in the ‘70’s, Reggie was like a God, larger than life, and before he finished up his career in 1987, putting in 21 seasons, he would put together a Hall of Fame career with 563 homers, 1702 runs batted in, an MVP Award in 1973, and five championships.
Add to that 14 all-star nods, four home run titles, a legendary homer in the 1971 All-Star Game against Dock Ellis, his 1977 World Series performance, and you can see why he goes down as one of the most well-known baseball personalities in the history of the game.