Next up on the "On-Card" All-Star train is the starting shortstop for the National League in 1969, Chicago Cub Don Kessinger, who made his second straight all-star team that season: 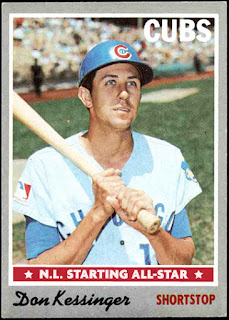 Kessinger was really a great player who gets lost over the years, making six all-star teams over his career, along with two Gold Gloves for such a great Cubs team at the time.

In 1969 Kessinger had perhaps his best season in the Big Leagues, collecting a career-best 181 hits, 38 doubles, 53 runs batted in and 109 runs scored.
Originally up to the Majors in 1964 as a 21-year-old, he would play the first 12 years of his career on Chicago's North Side with the Cubbies, before moving on to the St. Louis Cardinals for a season and a half, then the Chicago White Sox for the last two and a half years of his 16-year career.
In 1979, his last season of his career, he was also named manager of the White Sox before handing over the reigns to a young up and coming field general, a guy named Tony LaRussa.
For Kessinger, he would finish his career with 1931 hits, 899 runs, 100 stolen bases and a .252 batting average over 7651 at-bats and 2078 games played.