Another fun card to create for the blog, here's a 1977 "dedicated rookie" for former home run champ Tony Armas, who originally came up with the Pittsburgh Pirates with a handful of games in 1976: 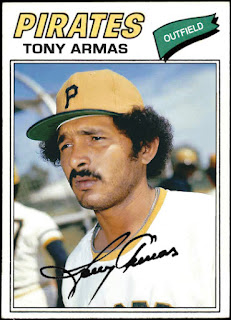 Armas went 2-for-6 at the plate in his first taste of the Big Leagues, good for a .333 average, with a run batted in and two strikeouts.
Of course we all know he would soon find himself part of a big nine-player trade that sent him to the Oakland A's, for whom he would suit up for the next six seasons.
In 1980 he would get his first shot at full-time play and would not disappoint, hitting 35 homers for Oakland while driving in 109 runs.
The following season he would end up tied for the American League lead with 22 homers, good enough to finish fourth in the MVP race at season's end and making his first All-Star team.
After a 1982 season that saw him dip a little with 28 homers and 89 RBIs to go with a .239 batting average, Armas was traded to the Boston Red Sox for former batting champ Carney Lansford, and he would immediately find Fenway park to his liking, hitting 36 homers while driving in 107, though hitting only .218.
1984 would arguably be his best season in the Big Leagues, as he would lead the A.L. with 43 homers and 123 RBIs while hitting .268, making his second All-Star team and finishing seventh in MVP voting, while also scoring a career-best 107 runs.
The next two years would see his playing time drop as well as production, hitting 23 and 11 homers respectively, leading to him moving on to the California Angels in 1987 where he'd appear in only 28 games, hitting .198 with three homers and nine RBIs.
He'd play a little more in both 1988 and 1989 but with only 13 and 11 homers the writing was on the wall for the 35-year-old, and would retire shortly after.